When heading to North America we had already made sure to have tickets for an NHL game. When in Boston, we still had almost a week to that one game, the home opener for San Jose Sharks. We had already been lucky in Montréal to get tickets for the pre-season game between Montreal Canadiens and Toronto Maple Leafs. So when noticing that there was a game also in Boston, how was I to stay away from TD Garden when the Boston Bruins was playing?

Getting Tickets at TD Garden

We noticed that there was going to be a game already during our first day in Boston, when we walked by the TD Garden. TD Garden, previously known as FleetCenter and TD Banknorth Garden, is the home of the hockey team Boston Bruins in the NHL as well as the basketball team Boston Celtics in NBA.

On our second day in the city, the Boston Bruins had a pre-season game against the Chicago Blackhawks. So once we were back from our short visit to Salem, we headed to TD Garden. Here I purchased a ticket for the game while Susann checked out what she wanted to do in the meantime. She thought that the game in Montréal and the upcoming game in San Jose was enough. Purchasing the ticket online turned out to be the cheapest option and I soon had a ticket far up in sector 214. So I finally had one of the 17,565 seats assigned to me.

While we didn’t get to see the home crowd celebrate any goals in Montréal, it turned out to be a different story in Boston. It only took about eleven minutes before Jake DeBrusk scored for the home team. This was to a great dismay for the Chicago fans sitting next to me.

The first period would turn out to be great for the home fans and TD Garden was eventually boiling. Charlie Coyle, Jake DeBrusk, and David Pastrnak had made sure that the score was 4-0 after 20 minutes.

The second period continued with David Pastrnak scoring his second before Chicago finally got a goal by Philipp Kurashev. Chicago didn’t get to celebrate for long before Karson Kuhlman scored 6-1, which was the score after 40 minutes.

I finally also had the chance to see one of the most famous parts of the NHL. That is, the flying caps when someone scores a hat-trick. After just a minute of the last period, David Pastrnak scored his third goal of the day and it wouldn’t take long before also Jake DeBrusk did it. The caps were flying onto the ice and big parts of the crowd were ecstatic. It was interesting to see so many celebrating during a pre-season game. The last period saw one more goal by Chicago, a goal by the Swedish national Tim Soderlund setting the final score to 8-2.

It was, however, noticeable that Chicago wasn’t on the same continent. Many of their star players had already traveled to Europe. The team was going to play their season-opening against Philadelphia Flyers in Prague.

For me, the only thing missing was a jersey as a souvenir. Sadly that seemed to be hard to find.

We will continue our trip, read more about our adventure in North America here >> 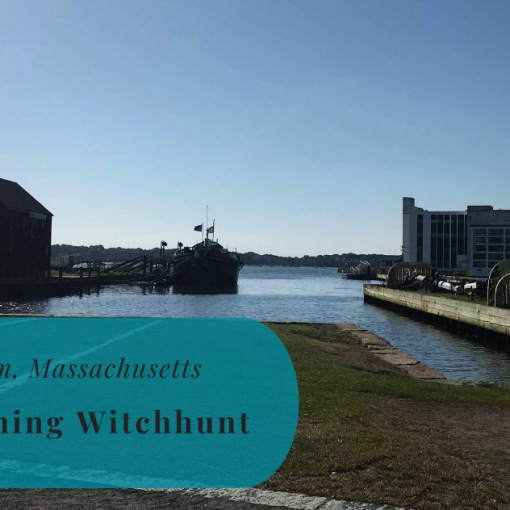 What happens when a town is haunted by its past? Once upon a time, women and men were burned at the stake […]

Already during our first evening in Montréal, our Airbnb host Olivier mentioned the Lachine Canal. At that time he suggested us to […]

Not too far from Downtown Boston, in Revere, you find the oldest public beach in the United States. Eight kilometers outside the […]

Mount Royal rises right on the edge of Downtown Montréal. It is this mountain, or hill depending on how you look at […]